If I made a list of the things I would hope well-educated adult citizens of the U.S. should know about the New Deal off the top of their heads, the Glass-Steagall Act would not be one of them. Nor would I quiz someone about whether the Act was an example of Relief, Recovery or Reform.

So what I want to do first off in this blog post is mention a few "please don'ts" about the Great Depression and the New Deal.

1. Don't make students fill out a chart listing all the examples of New Deal legislation. They will not learn anything except how to copy information from a textbook or from a friend. In the Age of Google, they can find the answer in a sec if they really need to know what the Glass Steagall Act was. And I would argue that they probably should know about it. When I say "know" I don't mean memorize the provisions, but they should learn something about the banking crisis and how the Glass Steagall Act attempted to solve it and the FDIC that we still have today. (For a good summary of the Glass-Steagall Act, check out federalreservehistory.org. Also, I have had good success with playing an excerpt from F.D.R.'s first fireside chat about the banking crisis. Find that here. Even middle schoolers will find it easy to understand. And it's worthwhile, I think, to have students get to hear the man himself, as did millions of Americans at the time.

2. A second thing I think can be frustrating is trying to categorize everything in the New Deal as "Relief," "Recovery," or "Reform." The reality is that many programs fit more than one category. Giving students a list of New Deal legislation and making them label it as one of the 3 Rs is just an exercise in frustration. (But describing the New Deal as a whole as a set of policies and programs that aimed to provide the 3 Rs is fine.)

3. When you ask our fictional well-educated adult citizen of the U.S. what caused the Great Depression in the first place, you are likely to get "the stock market crash" as an answer. The reality is much more complicated. Economic history is not my strong suit, so I'm not going to get into any details here. John Green's Crash Course on the Great Depression will provide good background for you. (Not so good, though, for students. Definitely not appropriate for middle schoolers, and like most Green Crash Courses, it goes awfully fast even for high schoolers and crams in too much. But good for the teacher. Or for students to review on their own at home, if they have internet access.) This video is also useful for dispelling another myth about the Depression and my 4th "please don't"...

4. Don't give Hoover too hard of a time. It is too simplistic to say that he didn't do anything about the Depression and that's why he lost so dramatically to Franklin D. Roosevelt in 1932. Certainly, he wasn't able to fix the economic collapse in American, and so naturally, voters looked elsewhere. But he was not the do-nothing loser that I remember learning about in school. I think students deserve a fuller picture. This article offers a helpful overview for teachers about Hoover. Presidential library websites are great resources for teachers. The Herbert Hoover Presidential Library and Museum is no exception. Check out this page for teacher resources.

1. For one thing, I mentioned in an earlier post that one way to conceptualize the 20th century (and therefore organizing your course) is to consider the New Deal as the second wave of domestic reform/liberalism, with the Progressive Era as being the first. Both periods accept the notion of a larger role for the federal government and taking responsibility for helping the people. Both address problems related to the economy. Both periods are distrustful of socialism on the left, as well as laissez-faire on the right. Both are periods that seek to avert social upheaval when capitalism seems in crisis.

But there are differences. One way to get students to see this is with this handout--I've provided you the key. You could use it in one of two ways. If kids have computers, you could mix up the contents of the chart and they can cut and paste the answers under the correct column. Alternatively--and a good way to have students literally manipulate the material--you can photocopy this and cut it up into cards. In pairs, students can put them into the correct piles.

2. Connect the Depression and the New Deal to the present. Younger students probably don't remember much about it, and even high schoolers may not really remember 2008 so well (or understand it), but it's still worth pointing out some of the similarities. Here are a few resources to help you do that:
3. Do find simple ways to explain the economics of the Depression, such as the chart below. You can also link to it here to see it more clearly (sorry about the blurriness--tech troubles). One activity you can do in class is give students a blank version of the flowchart with the text separate. See if they can put them in the correct order. 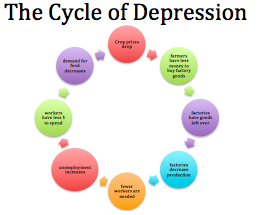 4. Do consider an entire lesson about F.D.R. and his disability. I have several reasons for this. First, it is a great way to study disability in the United States and how our attitudes have changed over time. Ironically, while our attitudes towards disability may be considered more progressive today, it is only because so much of FDR's struggles were kept hidden from the public that he was able to win the presidency--and that would likely still be true today. As Ken Burns points out in the TIME article I link to below, today's television cameras would have prevented FDR from making it out of the Iowa caucuses because he just would not have been seen as strong enough to be president. Second, it is such a fundamental part of who F.D.R. was, and as some historians have argued, Roosevelt's polio was a major part of his character. Check out the recent book by James Tobin, The Man He Became: How FDR Defied Polio to Win the Presidency. Of course, you probably don't have time to read the book before you teach the New Deal, but you can read a review of it here or listen to the interview with the author on NPR's Fresh Air. (Note: Fresh Air's Terry Gross does lots of interviews with many authors of history books. It's a great way to get some insight from recent books when you don't have time to read them!)
5. Do devote time to Eleanor Roosevelt. She is influential in so many ways, both during the Depression and World War II. First off, if you do teach about FDR's disability, you have to explain the role Eleanor played in his recovery and in serving as his "eyes and ears" on the road as travelled places he could not. Depending on the ages of your students and whether or not they bring it up, you may or may not want to go into anything about Lucy Mercer. But this New York Times article does point out some interesting correlations between Eleanor and Hillary Clinton.

Students also like to know how FDR is related to Theodore and to Eleanor. This link helps explain that, plus has all kinds of additional links to all things Eleanor.

6. Connect the Depression and the New Deal to world history and to what comes next: World War II. Especially in today's highly partisan era, it is easy to focus on how the New Deal changed our federal government for the better or the worse, depending on one's point of view. But it is worth considering how other world leaders handled the world's financial crisis: Stalin and Hitler. Especially when you get to the later New Deal and the criticisms of it from both right and left, this is a point well worth making.

7. Connect the Dust Bowl to other recent environmental disasters. I'm especially thinking here about Louisiana and the Gulf Oil spill of 2010 and Hurricane Katrina. All of these involve environmental disasters that led to financial disaster. And all of them involve some level of human agency. (i.e. There is plenty that wasn't done to insure the effectiveness of the levees prior to Katrina.) And don't forget to show students some of the incredible images of the Dust Bowl.

This blogpost just barely scratches the surface, I know, of these major topics. But in the interest of GettingToTheGulfWarByJune, I am going to press on...