The First "Half" of U.S. History: How to Get through Reconstruction by the End of the Year/First Semester

While Keeping in Mind How to Make It Meaningful for Students

My initial inspiration for this post was from a comment someone made on an earlier post of mine, Second Semester & the Importance of a Good Syllabus: How to Help Students Find Meaning in U.S. History and a post this January by Glenn Wiebe on his excellent blog, History Tech, What Should Your Kids Know?  In that post, he raised a question I was dealing with at the time, how much time should I spend on the War of 1812? And if we have to make choices as history teachers, how do we compare the significance of the War of 1812 to Reconstruction?

Last year, I spent approximately 5 days on the War of 1812.  A week.  Kind of a lot.  Part of the problem was I was interrupted by winter break.  (The post-winter break part focused on long term results of the war, rather than the war itself, and I used it as a segue to Andrew Jackson).  I spent 10 days on Reconstruction.  To me, this ratio seems a bit off, given the importance of Reconstruction towards an understanding of the Civil Rights movement and race relations today.

My point is not to debate the number of days one should spend on the War of 1812 vs. Reconstruction.  My point is that we DO need to think about what is most significant in the study of U.S. history and how best to incorporate it into our plans for the school year.  In Glenn Wiebe's post, he links to an article, "What Every American Should Know," from The Aspen Institute that raises the issues brought up by E.D. Hirsch in 1987 that helped fuel the flames of the "culture wars." (See also this article by Eric Liu in the Atlantic Monthly).  They are both worth a read, as they raise the most important question our students ask: 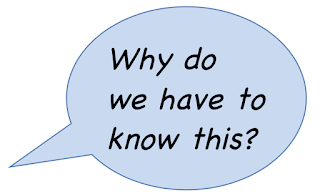 After reading these articles, think about what you teach.  To what extent are these things that every American should know? Why? If you can answer those questions, think about how that can transform your teaching, not to mention your crowded syllabus.  Consider the things that students really don't need to know.  Because you're going to have to make cuts.

I have said it before and I'll say it again, the only way to "cover" U.S. history is to make tough choices.  These are my guidelines:
The above are overall guidelines.  But there are many other things to take into consideration.  Most importantly, does your syllabus "tell a story"? Does each lesson lead logically to the next and does each unit lead logically to the next? Does each unit have a major topic/central issue/essential question? Or is just "Unit 4" because that's what comes next in the textbook? This is why you should read the articles I mentioned above.  This is what makes the difference between history that is "one damn thing after another" vs. history that helps students understand how our past shapes our world today.

In a few paragraphs, I will include a link to the calendar of what I taught every day this past school year.  It is different from the calendar with which I began the year.  That one contemplated less time on the American Revolution and the War of 1812, but more on the Civil War and Reconstruction.  Like all of you, I ran out of time and other things took longer than I thought.  You will also see in my calendar all our institute days, holidays and testing days.  These impact how and when we teach certain topics. For example, do you really want to start a new unit the day before a break? Perhaps it is better to add another day into the previous unit.  What do you teach on days when students will have been PARCC testing all morning?  Do you allow time for reviewing in class before a test?  And what does one teach on a day when half the class is out on a orchestra trip to St. Louis? Those are good days to either allow students "catch up" time to complete homework or to do something "extra"--like on May 20, when I did a lesson on Civil War music.

Sometimes you don't finish things because real life intrudes: I spent a good chunk of the day on November 16 discussing the shootings in Paris.  September 11th fell on a Friday this year, and so I decided to spend the day discussing that.  (See this post for those resources.)  Next year September 11 falls on a Sunday.  So maybe I will teach about it on the following Monday.  Or not at all.  Not sure yet.

So below is the link to my calendar, warts and all.  I include it in hopes that it might help others formulate a plan for the year.

Below are some other issues to consider when planning out the school year:

Additional resources:
Also, see my previous posts about the challenges of unit planning: