Note: this is my second post about teaching Reconstruction. See the first one here. See my most recent one here.

1. Have your students define what we mean by freedom. Whether or not you go into a lot of depth about the passage of the 13th amendment, certainly the central fact of Reconstruction is the freedom of the slaves. But freedom is a broad concept. So the question is, what did freedom mean for the newly freed slaves? What did it mean for their former masters? And how did it play out during this period? In what ways was freedom limited? Does freedom include economic opportunity? Suffrage? The ability to run for office? To live where one wants? Get an education? Go to school wherever one wants? The list could go on.... Have your students discuss this. Make lists. Make a group list. Refer to it often as you move through the unit.

2. My student teachers sometimes struggle with alternatives to lecture. While there is nothing wrong with a good lecture, it is a technique that is often overused by history teachers. There are some topics that are conducive to a brainstorm approach, in which students can figure out certain content material on their own without any sort of lecture or even a reading. The problems the nation faced after the Civil War is just one example of this. What student couldn't figure out on his or her own at least one example of a problem the nation (and you can specify North, South or both) had after the war? They all know that in wars, people die and property is destroyed. And they know that the slaves have, sort of anyway, been freed. So ask them to elaborate on that. Then you, the teacher, can add to their information.

So have students explore the scenarios below:


A. The Civil War has ended. In your groups, you have the following task. Brainstorm a list of the problems faced in the rebuilding process after the Civil War. Be specific.

B. You are a former slave in the South. You have four options:

Then, in groups or as a class, discuss what option they might choose. What are the pros and cons of each option? How would their choice depend on whatever their specific circumstances are, e.g. if they were male or female, young or old, a parent, a child, on a large plantation, small farm, in the city, etc. What are the advantages and disadvantages of each of the options? How would a former slave make him or herself aware of the options? Would he or she have to be able to read?

In both scenarios above, you now have the option to fill in the gaps during a discussion. You can point out how being illiterate might have hampered a former slave's ability to move, or the impact of the Homestead Act. (The latter scenario I adapted from a lesson in an excellent book for teachers, United States History: Eyes on the Economy). It is available for purchase online, and some lessons have been reproduced online. Pointing out economic costs and benefits can be a useful way to understand this period.

3. For teaching about the Freedmen's Bureau, some of the problems the newly freed slaves had, and the efforts of the government to help solve those problems, you can use this student-ready handout in groups. And here is a more middle-school friendly version of the document. I'm not sure where I got the original version of this document, but you can find more information/documents on the Freedmen's Bureau at the sites below.

4. What to do about Andrew Johnson? A few miscellaneous ideas: 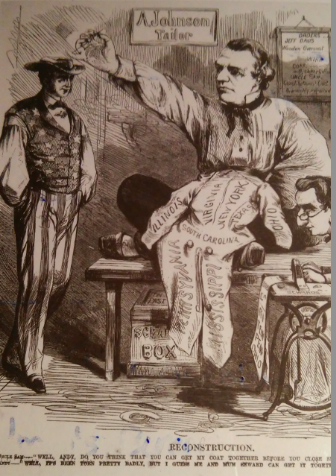 4. Here is my version of a DBQ I have put together for classroom use. And a few suggestions about DBQs:


Next post: how to handle the content-overload of the period 1865-1900 (minus Reconstruction).